Anthony Holman's supervised release was revoked for failing to pay restitution and picking up a new charge. However, the violation petition was not submitted until after Holman’s term of supervision had already expired. No summons was pending at the time either. Generally, whenever a U.S. Probation Officer believes that a defendant has violated his or her supervised release, a violation petition will be submitted to the Court. The petition can request that no action be taken, that a summons for the defendant's appearance be issued, or that an arrest warrant be filed. The U.S. Court of Appeals DC Circuit reversed and vacated the revocation for lack of jurisdiction. The expiration of a term of supervised release can be tolled under 18 U.S.C. § 3583(i). 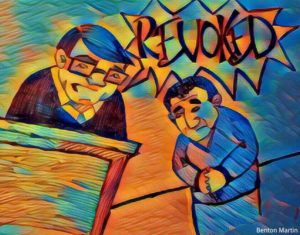 However, because no summons was issued for the alleged violations prior to the expiration of Holman’s supervision, the district court could not rely on § 3583(i) to support jurisdiction over the revocation, the court held.

The appeals court also rejected the Government’s argument that Holman’s failure to pay restitution amounted to an “ongoing” violation. The court held that Holman paid what he could when he was working and that no evidence existed which showed a “willful” failure to pay.