Just like the Federal Sentencing Guidelines, many states have their own version of sentencing guidelines, and sentencing charts. The State of New York is no exception. The Sentence Chart in New York for state crimes is particularly complicated. 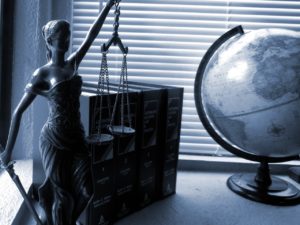 Courts typically impose indeterminate sentences for non-violent felonies. With those types of sentences, once the defendant has reached the minimum in the range he or she becomes eligible for parole. The Parole Board, then, determines how long the defendant will remain in prison.

For violent felonies, felonies involving drug offenses, and felonies where the defendant has a prior conviction for a violent felony, courts typically impose determinate sentences.

With regard to the sentencing chart in New York, the four charts work after answering three fundamental questions: (1) What is the classification of the crime charged? (2) Is the charged crime considered violent or non-violent? And (3) does the defendant have any prior felony convictions, and were any of them violent? Here is a more detailed breakdown of those questions:

Once those questions are answered you can turn to the charts.

As you can see below, the first Sentencing Chart in New York (Figure 1) gives potential sentences for defendants with no prior felony convictions. Accordingly, a person who committed first-degree robbery (a Class B felony) as a first offense will be sentenced to a determinate sentence that will be at least 5 years in prison. 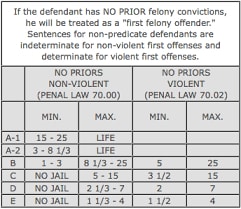 New York sentencing guidelines chart for no prior felony convictions. 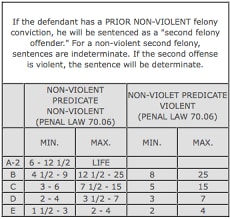 The third Sentencing Chart in New York (Figure 3) deals with potential sentences for defendants who have a prior violent felony conviction. Thus, a person who previously committed a violent felony (such as second-degree burglary) and who was just convicted of first-degree robbery (a Class B felony) will be sentenced to a determinate sentence that is at least 10 years in prison. 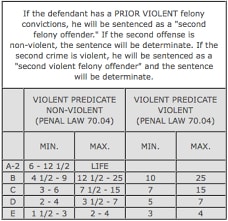 Finally, the fourth Sentencing Chart in New York (Figure 4) deals with “persistent felony offenders” (aka “discretionary persistent”), who are people who have been imprisoned for at least two prior felonies. It also covers “persistent violent felony offenders” (aka “mandatory persistent”), who are people who have two prior violent felonies on their record and have just been convicted of another violent crime. So, if a defendant with two prior non-violent felonies committed a first-degree robbery (again a Class B violent felony) then he or she faces an indeterminate sentence of at least 20 to 25 years in prison. 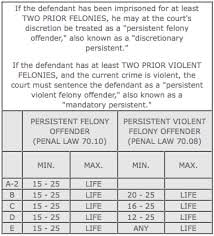 Remember that these charts do not cover drug offenses. There are other sentencing charts that deal with New York state drug offenses.

Suffice it to say that the sentencing charts above demonstrate how harsh New York sentences can be. It also shows that there is a complexity to New York sentencing that can cause confusion. In that regard, be sure to discuss your specific circumstances with a New York criminal defense attorney.