If you, or a loved one, have been charged with a federal crime, are currently on trial for a federal offense, or are facing a sentencing hearing in federal criminal court; then you are probably wondering what the Federal Sentencing Guidelines mean for your case. You may even be hearing terms like “base offense level” and “offense characteristics” and have no idea what they are referring to. If you are searching for the Sentencing Guidelines meaning, you have come to the right place.

Have no fear. Like a lot of things in the law, there are terms and phrases that sound sophisticated or complex, but actually are references to very common sense concepts. Once defined, the legalese is no longer daunting. Now let's dig into the Sentencing Guidelines meaning.

When it comes to the Federal Sentencing Guidelines, a little history is in order. Back in the 1980s, Congress noticed that federal courts in one part of the country were sentencing individuals to vastly different sentences than individuals in other parts of the country for the same criminal offense. In an effort to minimize such large sentencing disparities, Congress created the United States Sentencing Commission and tasked it with creating workable guidelines that would help even out federal sentences throughout the country. The goal was to minimize disparity in sentencing between federal courts in different parts of the country.

The Guidelines became effective in 1987 and were initially binding on all federal courts. However, after the United States Supreme Court's decision in United States v. Booker, 543 U.S. 20 (2005), the Guidelines were designated as non-binding. Non-binding means that the courts should use the Guidelines to assist in sentencing decisions, but they are not required to follow them.

Currently, courts are required to consider the Guidelines, and if a court wishes to depart from the Guidelines, the court must explain what factors warranted the departure from the sentence recommended by the Guidelines. Moreover, when an appeals court reviews a federal district court's sentence, the sentence is presumed to be reasonable if it follows the Guidelines.  See, e.g., Rita v. United States, 127 S. Ct. 2456 (2007). This, however, is an appellate presumption. Federal judges when sentencing defendants are prohibited from treating the Guidelines as presumptively reasonable. 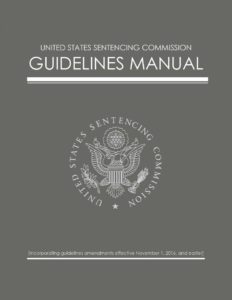 The next inquiry is what the Guidelines look like in operation. The philosophy behind the Guidelines is that they should look not only at the crime, but also at the criminal in determining an appropriate punishment. Indeed, it appears fair and just that a sentence for a first-time offender would be different than a sentence for a career criminal, even if they happened to be convicted for the same exact drug crime.

Accordingly, the Guidelines look at two overarching factors – the seriousness of the offense, and the offender’s criminal history.

Once the court has determined the final offense level (by taking the base offense level, including the specific offense characteristics, and making any necessary adjustments), and decided upon the appropriate criminal history for a defendant, the court then consults the Guideline’s Sentencing Table. That table is simply a grid where the Criminal History Category is on the horizontal axis and the Offense Level is on the vertical axis. The box where the Offense Level meets the Criminal History Category provides the sentencing range according to the Guidelines. Thus, a person with a Criminal History Category of I and an Offense Level of 20 (e.g., a robbery perpetrator with no criminal history) would have a recommended sentence of 33 to 41 months (or about 3 years or so) in prison.

Finally, once the court gets the Guideline’s recommended sentencing range, the court still has discretion to “depart” from that range based on unusual aggravating or mitigating circumstances. Those sentencing departures must, however, be explained by the court.

To conclude, this brief primer on the Federal Sentencing Guidelines meaning is just a short overview. If you need further information, you should consult an attorney with federal sentencing experience.

Brandon Sample, Esq. practices in federal courts throughout the country. Brandon Sample is a top-notch sentencing attorney and advocate. Those facing a sentencing hearing, or who wish to challenge a sentence already imposed, should call Brandon for a free initial consultation. Brandon can be reached at 802-444-HELP.