The Armed Career Criminal Act (ACCA) applies a specific set of sentencing provisions to convicted felons who use a firearm in the commission of a crime with a prior record of violent offenses. In United States v. Stitt, the Supreme Court recently addressed the question of what exactly constitutes a burglary for purposes of determining whether the ACCA applies to a defendant convicted of an additional crime with a handgun. The unanimous decision clarified that even if a structure transformed into sleeping quarters was formerly a vehicle, this structure could still fit within the definition of burglary.

What is the Armed Career Criminal Act (ACCA)? 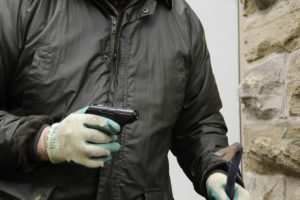 The Armed Career Criminal Act was passed in 1984 during the Reagan Administration to impose more severe sentences on criminals who are convicted of committing a crime with a gun if they had already been convicted of at least three certain violent crimes. The minimum sentence for those criminals who fall within the ACCA's definition of prior offenders is 15 years with a maximum term of life in prison. This act calls for an additional five years in prison above what the Gun Control Act requires for minimum sentencing.

Burglary Under the ACCA

In United States v. Stitt, the defendant was convicted of possessing a handgun in the commission of a crime with a long record of prior convictions that would have made him a candidate for Armed Career Criminal Act (ACCA) enhanced sentencing. However, the defendant argued that his prior conviction for burglary under Tennessee law actually involved the invasion of a mobile vehicle that had been converted into living quarters. He contended that this fell outside the generic definition of burglary as the unlawful invasion of “a building or structure” with the intent to commit a crime once inside. Therefore, according to the defendant, this offense should not count toward the three convictions required by the ACCA to impose enhanced sentencing minimums.

The Sixth Circuit Court of Appeals agreed with the defendant's arguments. The Supreme Court unanimously overturned the appellate court, holding that for the purposes of the ACCA, the term burglary "includes burglary of a structure or vehicle that has been adapted or is customarily used for overnight accommodation." In other words, a mobile structure fits within the generic definition of burglary. Thus, the defendant was eligible for sentencing under the ACCA and could receive the mandatory 15-year minimum sentence.

Takeaways from United States v. Stitt for the Future of the ACCA

The Supreme Court decision in United States v. Stitt reflects that the current justices are not looking to poke fatal holes into the ACCA in the near future. Unfortunately, defendants facing sentencing under the ACCA based on crimes involving burglaries will not have as many opportunities to appeal the applicability of the ACCA to their convictions involving crimes committed with a gun. It seems now that many state burglary laws will ostensibly fit within the generic definition of burglary pursuant to the ACCA.

Looking further ahead, this recent Supreme Court decision highlights that the justices are not likely to look for any possible avenue to strike down the ACCA. Some have predicted that the upcoming Supreme Court decision in Stokeling v. United States, another ACCA case involving issues over a state court's definition of robbery, is the opening that the justices have been waiting for to attack the ACCA. While it is possible that they are simply waiting to decide on that case before signaling their disapproval of the ACCA, the unanimous decision in United States v. Stitt seems to suggest otherwise. The Supreme Court's decision in Stokeling v. United States is expected during the 2019 session.

Posted in Sentencing
← What Is the Possible Sentencing for Conspiracy?Judge Interferes with Plea Negotiations →