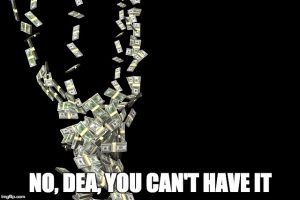 Terry Honeycutt and his brother, Tony, were charged with conspiring to distribute meth. Tony pled guilty. Terry went to trial and was convicted.

The Sixth Circuit reversed, holding that Terry was subject to a federal forfeiture order under a theory of “joint and several liability” because he was convicted of a conspiracy charge. This ruling came in the face of the Government’s concession that Terry had no ownership interest in the hardware and received no direct benefit from the hardware store’s sales.The Supreme Court granted certiorari and reversed. Writing for the unanimous Court, Justice Sotomayor explained:

A creature of tort law, joint and several liability “applies when there has been a judgment against multiple defendants.” McDermott, Inc. v. AmClyde, 511 U. S. 202, 220– 221 (1994). If two or more defendants jointly cause harm, each defendant is held liable for the entire amount of the harm; provided, however, that the plaintiff recover only once for the full amount. See Restatement (Second) of Torts 875 (1977). Application of that principle in the forfeiture context when two or more defendants conspire to violate the law would require that each defendant be held liable for a forfeiture judgment based not only on property that he used in or acquired because of the crime, but also on property obtained by his co-conspirator. An example is instructive. Suppose a farmer masterminds a scheme to grow, harvest, and distribute marijuana on local college campuses. The mastermind recruits a college student to deliver packages and pays the student $300 each month from the distribution proceeds for his services. In one year, the mastermind earns $3 million. The student, meanwhile, earns $3,600. If joint and several liability applied, the student would face a forfeiture judgment for the entire amount of the conspiracy’s proceeds: $3 million. The student would be bound by that judgment even though he never personally acquired any proceeds beyond the $3,600. This case requires determination whether this form of liability is permitted under 853(a)(1). The Court holds that it is not.

The syllabus for the decision explains each of the following central holdings of the case:

(a) Section 853(a) limits forfeiture to property flowing from, 853(a)(1), or used in, 853(a)(2), the crime itself—providing the first clue that the statute does not countenance joint and several liability, which would require forfeiture of untainted property. It also defines forfeitable property solely in terms of personal possession or use. Section 853(a)(1), the provision at issue, limits forfeiture to property the defendant “obtained, directly or indirectly, as the result of” the crime. Neither the dictionary definition nor the common usage of the word “obtain” supports the conclusion that an individual “obtains” property that was acquired by someone else. And the adverbs “directly” and “indirectly” refer to how a defendant obtains the property; they do not negate the requirement that he obtain it at all. Sections 853(a)(2) and 853(a)(3) are in accord with this reading. Pp. 3–7.
(b) Joint and several liability is also contrary to several other provisions of 853. Section 853(c), which applies to property “described in subsection (a),” applies to tainted property only. See Luis v. United States, 578 U. S. ___, ___. Section 853(e)(1) permits pretrial asset freezes to preserve the availability of property forfeitable under subsection (a), provided there is probable cause to think that a defendant has committed an offense triggering forfeiture and “the property at issue has the requisite connection to that crime.” Kaley v. United States, 571 U. S. ___, ___. Section 853(d) establishes a “rebuttable presumption” that property is subject to forfeiture only if the Government proves that the defendant acquired the property “during the period of the violation” and “there was no likely source for” the property but the crime. These provisions reinforce the statute’s application to tainted property acquired by the defendant and are thus incompatible with joint and several liability. Joint and several liability would also render futile 853(p)—the sole provision of 853 that permits the Government to confiscate property untainted by the crime. Pp. 7–9.
(c) The plain text and structure of 853 leave no doubt that Congress did not, as the Government claims, incorporate the principle that conspirators are legally responsible for each other’s foreseeable actions in furtherance of their common plan. See Pinkerton v. United States, 328 U. S. 640. Congress provided just one way for the Government to recoup substitute property when the tainted property itself is unavailable—the procedures outlined in 853(p). And as is clear from its text and structure, 853 maintains traditional in rem forfeiture’s focus on tainted property unless one of 853(p)’s preconditions exists. Pp. 9–10.

The judgment of the Sixth Circuit was accordingly reversed, and the case was remanded for further proceedings.

Only the D.C. Circuit in United States v. Cano-Flores, 796 F.3d 83, 91 (CADC 2015) previously held that joint and several liability was not applicable to federal forfeiture proceedings.

Brandon’s take: This decision is very important, but federal forfeiture issues cannot be raised in a 2255 motion except in possibly the Sixth Circuit. This is because most courts have held that a 2255 motion does not extend to monetary penalties like fines and restitution because a claim concerning same does not satisfy the “in custody” requirement of 28 U.S.C. 2255. Honeycutt represents a new rule of statutory construction, and thus may be amenable to a 28 U.S.C. 2241 petition, but there are questions about whether a similar “in custody” requirement in 2241 may also bar a 2241 petition. As a result, it may be difficult to raise a Honeycutt claim in a post-conviction proceeding. Further exploration of these issues will be necessary in an appropriate case. See: United States v. Honeycutt, No. 16-142 (2017). The Court's docket for Honeycutt can be accessed here.