We all have watched courtroom dramas on TV, in the movies, and even on stage. Invariably, the crucial moment we all wait for is when the jury foreperson gives the verdict. Indeed, the story usually concludes at that point. In reality, however, there is another whole proceeding that follows a jury verdict of “guilty.” That proceeding is the federal sentencing hearing.

This article will discuss what goes on both before and during a sentencing hearing in federal court. Hopefully, this window into the sentencing process will answer some questions for you, and prompt you to consult further with your defense attorney if you are currently facing sentencing.

Prior To Sentencing: Probation’s Input, Guidelines, and Attorney Input 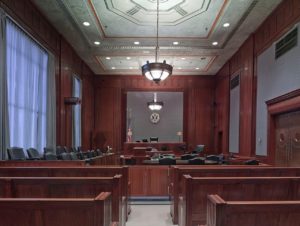 Those 90 days gives a probation officer time to prepare a Pre-sentence Report, or PSR. The PSR is a long, rather involved, document that is essentially a biography of the defendant’s life, concluded by a sentencing recommendation from the probation officer who prepared the PSR.

The PSR covers such topics as:

The recommended federal sentencing range that comes from consulting the Guidelines is merely advisory for the judge, similar to the probation officer’s PSR recommendation. It is important to note, however, that if the judge ultimately orders a sentence that is outside the range recommended by the Guidelines, the judge would need to give proper justification for the departure.

In addition, the judge must be sure to consult any mandatory minimums applicable to the defendant’s case.

Also prior to the actual federal sentencing hearing, both defense counsel and the prosecutor may provide the judge with a written submission, arguing the points that each deem relevant. For example, a defense counsel may provide a list of reasons why a defendant deserves leniency, may recommend certain “downward departures” of a sentence permitted by the Sentencing Guidelines, and attach letters of support from defendant’s friends, neighbors, and employers in order to persuade the judge to impose a lighter sentence.

Conversely, the prosecutor may provide a sentencing memorandum explaining what sentencing enhancements may apply to the defendant’s case and make a sentencing recommendation as well.

On the date of sentencing, the judge will first ask the parties if they have received the PSR, and whether there are any changes. It is important to ensure that the PSR is as error-free as possible, because it will be an important part of the history of the case. In fact, it is not uncommon for a PSR to provide important facts for a subsequent appeal, which could occur years after a sentence is imposed.

Once the PSR is discussed and edited as necessary, the judge then allows the attorneys, both prosecution and defense, to make oral arguments. Further, the defendant is accorded the “right of allocution.” That means the judge is required to give every defendant in a criminal case the chance to speak before the judge imposes sentence. While it is not required, a defendant may want to say something to the judge so the judge gets a full picture of the person he or she is about to sentence.

In some circumstances, the victim or victim’s family may also be allowed to speak at sentencing. Notably, the sentencing hearing, like all court proceedings, is open to the public. A defendant should know that the victim, or victim’s family, as well as friends, family and neighbors could be there. A defendant’s family and friends may also be in attendance.