Did you ever wonder how a judge arrives at the criminal sentence he or she imposes in federal court? Is it gut instinct? Are there law books to consult? In fact, federal judges typically go through a rigorous analysis of the case before arriving at a sentence consistent with the United States Sentencing Guidelines and other statutory factors. To help determine what the sentence should be under the advisory Sentencing Guidelines, courts rely upon aPre-sentence Investigation Report which is prepared by a U.S. Probation Officer using the Sentencing Worksheet.

This article will take you through the ins and outs of the Sentencing Worksheet so you can have a better understanding of all the factors that go into the ultimate sentence a judge hands down.

Worksheet A of the Sentencing Worksheet helps the judge in that regard. Here is a breakdown of how the worksheet operates. 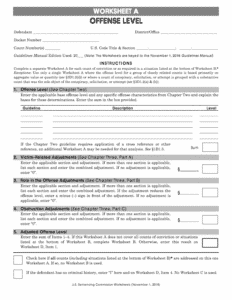 After looking at the four categories above, the court arrives at an “Adjusted Offense Level.” As a quick example to see how this works, let’s take the Assault offense mentioned earlier. Using the Sentencing Worksheet, the base offense level is 7 because the defendant threatened the victim with a knife. Assume in our example that the victim of this particular Assault was a police officer. The court would then add 3 levels to the offense level, bringing the number to 10.

The court would then look to the defendant’s role in the Assault. Assuming that the defendant was the sole assailant, then no real aggravating or mitigating role adjustment need apply. Let’s assume defendant obstructed justice. Because of the obstruction, two more levels would be added.

Thus, an overall Adjusted Offense Level of 12 is produced.

Without going into too much detail about this part of the Sentencing Worksheet, Worksheet B helps the court to determine the offense level when a defendant is convicted of multiple counts. In many cases, certain closely related counts can be “grouped” into one for purposes of arriving at the correct offense level number.

The next worksheet touches upon the second fundamental consideration under the Sentencing Guidelines – the defendant’s criminal history.

In sum, it appears that our hypothetical defendant (someone who assaulted a police officer while threatening a with knife, and resisted arrest) is facing a sentence of one to one and a half years in prison for the crime.

If you need assistance with your sentencing hearing, or want to challenge your sentence after the fact, be sure to consult Brandon Sample, Esq.  Brandon is a nationally known federal criminal defense attorney. Call 802-444-HELP for a free consultation and to learn more about what Brandon can do for you.