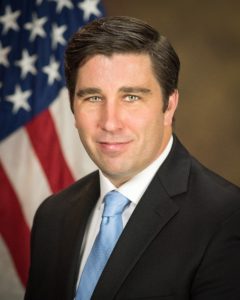 In July 2018, Assistant Attorney General for Legislative Affairs, Stephen Boyd, wrote to the White House voicing the Department of Justice's opposition to the First Step Act. The letter outlines several arguments in opposition to the proposed legislation:

Basically, the DOJ opposes the entire legislation. Unsurprisingly, it offers no alternatives except to state that it "is working hard to improve its evidence-based-recidivism-reduction efforts to help prisoners become contributing members of society."

Of course there are many flaws with the DOJ's "arguments" in opposition to the legislation. 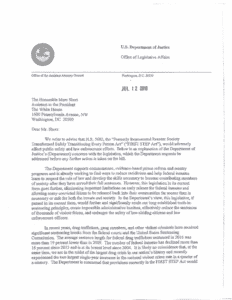 First, as Freedom Works pointed out in a recent rebuttal to the letter, correlation does not prove causation. In other words, it is not fair to suggest--without more--that an alleged rise is drug and violent crimes is because federal judges in recent times have sentenced less harshly.

Second, while the First Step Act does give some prisoners the opportunity to spend more time in the community versus a jail cell, prisoners released pursuant to the "time credit" provisions of the law would still be in BOP custody. Any violation of the law, any mistake the prisoner may make while released, could result in the prisoner being immediately returned back to federal prison. Thus, in many ways, the First Step Act creates a "federal parole light" of sorts. Federal parole was abolished in the United States in 1984. Since then "truth in sentencing" laws have caused prison populations to dramatically increase.

Third, the legislation will not lead to swaths of violent prisoners being released, contrary to what DOJ suggests. Part of DOJ's premise concerning the release of "violent" offenders lies in how DOJ typically defines "violent." For instance, DOJ's long held mantra has been that anyone who receives a two-level gun enhancement under the federal sentencing guidelines as part of their offense is "violent." But there is much more to the story. What the DOJ does not tell the public is that many offenders receive gun enhancements for having weapons that are not theirs, that were lawfully possessed, or that were inoperable. Yes, you can receive a gun enhancement for a "gun" that does not work. All of this is because of how the U.S. Sentencing Commission has worded the gun enhancement provision of the U.S. Sentencing Guidelines. Under the Sentencing Guidelines, a defendant will receive a gun enhancement unless the defendant demonstrates that "it is clearly improbable that the weapon was connected with the offense." This is an almost impossible burden for many defendants to meet. Sorry DOJ, but having a gun that is not yours or that doesn't work does not mean you are "violent" offender.

Fourth, DOJ's whining about how the legislation would affect illegal aliens is ridiculous. Yes, the First Step Act would allow non citizens to be released earlier for completing programs while in BOP custody. But the legislation does not dictate that these individuals be released back into US communities. Rather, the legislation directs that these prisoners be turned over to immigration officials for deportation. This would save US taxpayers millions of dollars in incarceration costs by returning non-citizens to their countries of origin.

Finally, DOJ's assertion that the bill imposes unworkable "administrative burdens" is unfounded. The BOP receives billions of dollars a year in funding from Congress. The BOP monitors inmate telephone calls through sophisticated electronic monitoring systems. Allowing prisoners more time to call their family members will impose no undue burden on the BOP. The same is true for the implementation of other aspects of the legislation. In essence, the DOJ's claims of administrative burden amount to nothing more than crying about the possibility of DOJ officials needing to do more work. In my book, that is a good thing.

On August 2, 2018, the President met with Senators Mike Lee (R-UT), Lindsey Graham (R-SC), Chuck Grassley (R-IA), and Tim Scott (R-SC), among others to discuss the legislation.

A compromise was apparently worked out that would reduce mandatory minimum penalties for 21 U.S.C. § 851 enhancements from life to 25 years, and 20 years to 15 years.

The compromise would also expand the availability of the safety valve, correct the problem with the stacking of 18 U.S.C. § 924(c) sentences, and fully apply the Fair Sentencing Act retroactively.

But in a blow to sentencing reform advocates, including prisoners and their family members, only the Fair Sentencing Act sentencing reforms would apply retroactively. In other words, prisoners with existing life sentences for 851 enhancements would not benefit. The same would be true for prisoners serving "stacked" 924(c) sentences.

The President reportedly expressed support for the proposed compromise legislation. There is now hope that the Senate might vote on the First Step Act as soon as this month, or during the lame duck session after the November election.

Posted in Legislation
← Brett Kavanaugh On CrimeSentencing Guidelines for Drugs: New Bill on Fentanyl, and the Fallacy of the “Tough-On-Crime” Approach →