It takes place in private. Sometimes it occurs within a matter of minutes. And it has a massive impact on a person’s life. It is the practice of plea bargaining, which sometimes takes the form of sentencing bargaining.

You cannot read a book or watch a television program about a legal case where the concept of plea bargaining does not come up. It is ubiquitous in our system of criminal justice, and it is a practice with the least amount of checks and balances.

What is so unusual about the practice of plea bargaining and sentencing bargaining is that it has limited judicial oversight, but it is the way virtually all criminal cases are resolved. Very few cases go to trial these days. Between 90 to 99 percent of criminal cases in state and federal courts throughout the country end with a plea bargain. 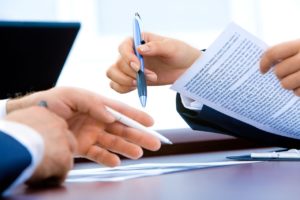 What is Sentencing Bargaining?

Sentencing bargaining is, for lack of a better way of thinking about it, one type of deal made with the government to resolve the case by a guilty plea. Specifically, with a plea bargain, the charge to which the defendant pleads guilty is the most important factor. With a sentencing bargain, the sentence the defendant will serve is the most important factor.

For example, if a person committed a murder, then the prosecutor may offer that the person plead to manslaughter to persuade the defendant to enter a plea. That is the classic example of a plea bargain.

In that same example, if the defendant cared more about a shorter sentence, then the prosecutor may offer that the defendant plead guilty to murder (the actual crime committed) but offer a lighter sentence. That is sentencing bargaining.

Why Engage in Sentencing Bargaining?

The fundamental issue with regard to sentencing bargaining is whether taking responsibility for the actual charge is worth it in exchange for a lighter sentence. Stated simply, the question is:  will you care if you have a particular charge on your criminal record.

If you are someone who has prior convictions, it is possible that you are less concerned with the type of charge that ends up on your record as long as you get the lightest sentence possible. In those circumstances, sentencing bargaining may make sense.

However, it is always important to consider the ramifications that may result from pleading to a certain charge. For example, certain violent crimes may open you up to so-called “Three Strikes” laws (either federal or state), which lead to severe penalties for a third conviction. Or, with certain sexual assault cases, a conviction on certain charges will lead to mandatory sex offender registration requirements.

As with all decisions involving a criminal conviction, you should consider any plea offer carefully, and in consultation with your defense attorney. There is no requirement to accept the first offer the prosecutor puts on the table. Take your time to make sure that the plea agreement is reasonable, and that you understand all of the consequences that may flow from pleading guilty to a particular charge.

Remember, you are innocent until proven guilty. The prosecution has the burden to prove that you committed a crime beyond a reasonable doubt.

As noted earlier, plea/sentencing negotiations take place between the prosecutor and the defense attorney, in consultation with his or her client. There is no oversight as to the negotiation process, and oftentimes the prosecutor has the most leverage in the negotiation because he or she is most aware of the strength of the case against a defendant.

The oversight the court does have over a plea, however, is that the court has the ultimate authority to accept or reject the plea deal after it is made. Further, in most, if not all jurisdictions, the judge does not have to follow the sentence recommended in the plea agreement.

In other words, the prosecution and defense can make a plea deal, but the defendant must understand that the judge is not bound by the sentence recommended in the agreement. Of course, if the judge decides to not follow the sentence recommendation that was hammered out in the plea agreement, then the defendant has the option to withdraw his guilty plea. Most times, however, the judge will go along with the terms of the plea agreement.

If all parties and the judge are on the same page as to the plea agreement and recommended sentence, then the court will hold a plea hearing. At that hearing, the judge needs to ensure three things are present:

When engaging in plea or sentencing bargaining, you need to be sure you are represented by an experienced, seasoned criminal defense attorney. If you or a loved one are currently facing a criminal charge in federal court, we invite you to contact Brandon Sample, Esq. Brandon is a criminal defense attorney, sentencing advocate, and author. He brings passion and skill each case in order to achieve the best possible outcome. Call Brandon today for a free consultation at 802-444-HELP.

Posted in Sentencing
← Rehabilitation: Reviving One of the Forgotten Sentencing TheoriesThe First Step Act: All Your Questions Explained →