April brought us the bomber who terrorized Austin, Texas, for two weeks with random mail-bomb attacks. That type of domestic terrorism, however, is nothing new.

Rewind to October 2002 in the Maryland-D.C.-Virginia area. As you may recall, the so-called D.C. Sniper terrorized that entire region for three weeks. Everyone was on edge. Why? Because people who were simply doing everyday things – pumping gas, mowing the lawn, putting groceries into the trunk in a supermarket parking lot – became domestic terrorism targets. Indeed, the random shootings paralyzed the D.C. region, much like Austin was paralyzed before the bomber finally met his demise. 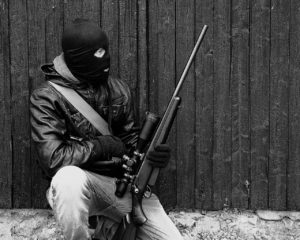 When all the facts were revealed in the D.C. Sniper case, two perpetrators were prosecuted – John Allen Muhammad and Lee Boyd Malvo. It was later learned that the shootings were carried out, 14 in all, by the pair shooting at random people through a small hole in the trunk of a Blue Chevy Caprice. Muhammad was the mastermind of the deadly rampage and was much older than Malvo, who was 17 years old at the time. It appeared that Malvo behaved as some type of apprentice to the murderous Muhammad. Yet, Malvo was involved as the shooter in some of the killings.

Muhammad ultimately received the death penalty for his domestic terrorism crimes. Malvo, however, was spared that fate. The jury in his case sentenced him to life without parole, rather than the only other choice of the death penalty. Recent U.S. Supreme Court opinions, however, may have given Malvo an opening for a credible sentencing appeal.

Changes in Criminal Sentencing Law Since 2002

In 2002-2003, when the D.C. Sniper case was tried, mandatory life-without-parole sentences were in effect in most states, even for violent juvenile offenders. Malvo was a juvenile, 17, at the time of the D.C. Sniper crimes, and he was sentenced to life without parole, though it was not necessarily mandatory in his case.

Two U.S. Supreme Court cases since that time have now given Malvo a reason for a sentencing appeal. First, in 2012, the Court in Miller v. Alabama determined that a mandatory life-without-parole sentence for a juvenile offender violates the Eighth Amendment’s prohibition of “cruel and unusual punishment.” The Court reasoned that a mandatory sentence takes away a judge’s ability to consider a juvenile’s youth and the family/home environment when imposing sentence.  While a court could still sentence a juvenile to life without parole, the court must do so by looking at all the facts of the case. It cannot be made mandatory by the legislature. This is true even in domestic terrorism cases.

Second, in 2016, the Court in Montgomery v. Louisiana, recognized that the holding of Miller should be made retroactive. That is, that mandatory life-without-parole sentences decided prior to Miller can be re-litigated because making the sentence mandatory was unconstitutional.

The recent Montgomery decision opens up an opportunity for Malvo. As a juvenile sentenced to a life-without-parole sentence, he believes Montgomery makes him eligible for his sentence to be revisited. A federal judge confirmed that eligibility earlier this year, ruling that Malvo should get a new sentencing hearing. Wanting to keep Malvo’s sentence as is, the Virginia Attorney General has appealed to the Fourth Circuit Court of Appeals, and an appellate hearing will be held in the very near future.

Malvo’s attorney argues that circumstances have changed and that Malvo should be allowed to appeal and have his sentence reviewed because he is a different person. Now 32 years old, Malvo is no longer under the spell of John Muhammad’s domination. Rather, Malvo’s attorney maintains, Malvo is back to the kind, compassionate person he was in his youth.

The State of Virginia, by contrast, will likely argue during a sentencing appeal, that Montgomery does not change any circumstances for Malvo because his sentence was not mandated by the legislature. Rather, a jury determined that he should receive life without parole after a sentencing hearing. More specifically, Miller and Montgomery, the State will argue, are only concerned with life-without-parole sentences that were mandatory.

Only time will tell what the Fourth Circuit Court of Appeals will do. It is important to note, however, that even if Malvo’s sentencing appeal hearing is allowed to proceed, it is very possible that he will not get a reduced sentence. Malvo’s crimes were particularly horrific. There are many more juveniles in the criminal justice system who have more sympathetic stories to tell, and who have committed less serious offenses.

Brandon Sample, Esq. is an experienced sentencing advocate, practicing in federal courts throughout the country. For a free consultation, call 802-444-HELP today.