Consistent with our commitment to hold decision-makers accountable, the Law Office of Brandon Sample has filed a number of FOIA requests with the BOP since the First Step Act became law. Just this week, our office obtained internal Federal Bureau of Prisons documents describing the implementation of the Elderly Offender Home Detention Program and how this program can assist elderly offenders with obtaining an early release from custody. 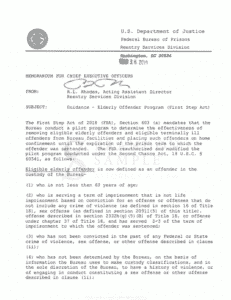 The Elderly Offender Home Detention Program was reauthorized by the First Step Act of 2018 and it allows certain elderly federal inmates to seek placement on home confinement before the expiration of their prison sentence. Before the Law Office of Brandon Sample received these documents, it was not clear how an inmate could try to take advantage of the Elderly Offender program.

The most important takeaway is this: “Inmates may [today] request consideration for the Elderly Home Confinement Pilot.” Not when BOP fully implements the program. This means that eligible elderly inmates can file a request for an early release from federal prison today.

If you or a loved one are interested in receiving an early release in conjunction with the BOP’s Elderly Offender Program, contact us at 802-444-4357 or request a free consultation to discuss your case and how we can assist you in applying for this program and an early release from custody.

What Is BOP Saying About the Elderly Offender Program Today?

Here at the Law Office of Brandon Sample we know that sunshine is always the best disinfectant. As of this publication, it seems that our law firm is the only news source that's received a copy of the BOP’s March 15, 2019 memo on the Elderly Offender Home Detention pilot program.

While some other people might try to charge you money for access to this information, we think it’s important to give you the information directly. With that in mind, the text below is reproduced word-for-word from the BOP’s late-breaking memo on this important program.

Section 603(a) of the First Step Act also significantly altered the Bureau’s Elderly Offender Program, a program which was designed to provide early release to elderly inmates, but which was so limited in scope to be effectively unavailable for most qualifying inmates.

What Does this Mean for You Right Now if You Are Eligible?

First, the biggest takeaway from the BOP memo is that eligible elderly offenders can apply TODAY for consideration to be included in the Elderly Home Confinement pilot program. That is a big change, potentially allowing elderly inmates to secure an early release from custody.

Second, as the memo points out, additional policy statements regarding the Elderly Home Confinement program are still in the works. This memo was only distributed within BOP 12 days ago, so it seems that BOP does not have its formal policies set in stone yet on how this program will work.

Third, for now the only “policy” put out in the BOP’s memo basically quotes the statutory requirements already in place under 34 U.S.C. section 60541(g). There are no new guidance requirements yet in place it seems.

In short, inmates who now qualify for this program will be able to file a request, and if granted, be transferred to home confinement to serve out the remaining term of their imprisonment. While it is not clear how streamlined this process will be, or how many inmates will be referred, this new program will greatly expand at least the number of inmates who are eligible to submit a request and potentially obtain an early release.

Giving It Straight To Our Readers

As of the publication of this article, it seems that no other reliable news sources have provided this important update on how the BOP is implementing the Elderly Home Confinement program to people who are actually locked up. We wanted to get this in to the hands of our readers quickly to make sure that people who can actually benefit from the program know what is going on.

If you or a loved one are interested in seeking consideration for inclusion in the Elderly Offender Home Detention pilot program, please contact our office at 802-444-4357 or request a free consultation. Our attorneys can review your case, determine if you are eligible, and assist you in presenting a compelling case for early release.