On December 6, 2018, the U.S Supreme Court heard oral argument in the case of Gamble v. United States, No. 17-646. Because we covered the Gamble case in some detail last week, we thought it only fitting that we give you the blow-by-blow on how the oral argument went before the Court.

Just to recap the background of this case, U.S. v. Gamble began in 2015 when Terance Gamble was stopped by police in Alabama for driving with a broken headlight. Upon searching Gamble’s car, the police found marijuana, a digital scale, and a handgun. 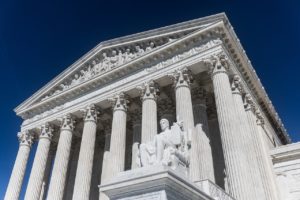 After serving a year-long sentence for his state conviction, Gamble argued in federal court that it would be a violation of the Double Jeopardy Clause of the Fifth Amendment to prosecute him federally for the same handgun possession offense. The lower courts dismissed the argument, noting the Supreme Court’s prior decisions allowing an exception to the Double Jeopardy Clause.

U.S. v. Gamble at Oral Argument before the Court

The attorney for Mr. Gamble was the first to argue before the Court. Overall, Gamble’s attorney emphasized the plain language and the original understanding of the Double Jeopardy Clause at the time the Constitution was drafted to support the notion that the “separate sovereigns” doctrine should be overturned. It appeared that Gamble’s attorney wanted to appeal to the “originalists” on the Court.

The justices on the Court, however, seemed unimpressed with the sparse historical court decisions to support his argument. Notably, the scrutiny on Gamble’s argument was not only from those justices who are not “originalists.” Indeed, Justice Roberts seemed to be skeptical that the new American republic, at the time the Constitution was drafted, would want to adopt the English approach such that it would encroach on the new country’s sovereignty.

Justice Alito, similarly, took issue with Gamble’s argument. Justice Alito expressed concern that the United States would be unable to prosecute a terrorist if the terrorist was first prosecuted for his acts of terrorism in a country that may or may not have the sophistication and procedures for fairness that American courts have.

Justice Kagan – a Justice who is not persuaded by the current trend of “originalism” – directed Gamble’s attorney to the fact that the “separate sovereigns” doctrine has been the law for 170 years, with 30 Supreme Court justices passing on its validity. She then pressed Gamble’s attorney on the role of stare decisis – respect for past Court precedent – in this equation. She also had what was probably the best takeaway quote from this part of the argument:

I’m a little bit . . . confused as to why your argument seems, frankly, a little bit one note. You know, your brief and now your argument is just all about the original jurisdiction. And there are some people on this bench that think that that is the alpha and omega of every constitutional question.

But there are other people on this bench who do not, who think that 170 years of significant practice where 30 justices have signed on to a rule, that you’re going to have to give me more than the fact that . . . pretty early on in the republic they decided that that was not what the original understanding was, even if they’re wrong. . .

And so this is your opportunity to give me more.

Even the new Justice Kavanaugh – another “originalist” – seemed concerned with stare decisis whereby the Court must show stability and humility in respecting precedent.

Questioning of the Assistant Solicitor General, arguing for the government, began with Justice Ginsburg noting that the “separate sovereigns” doctrine has been widely criticized by academics and federal courts alike. The government responded that while the doctrine has been criticized there are no real practical problems that have arisen from its existence.

The attorney added that the federal government only advances a federal prosecution after there has been a state prosecution in about 100 cases per year. Plus, the government attorney noted that overturning the doctrine would eliminate the possibility of domestic prosecutions if a crime was already prosecuted by a foreign country, which is huge cost to the United States.

Justice Ginsburg and Justice Gorsuch pressed the government’s attorney further on the federalism problem that arises with the doctrine. The government’s attorney, however, was rather adept at fielding the Justices’ questions with case examples, and with noting that people in the country are already well aware that they are subjected to taxes, and their businesses are regulated, by both the federal and state governments. Thus, being subject to both state and federal criminal jurisdiction is not a surprise to anyone.

In sum, the government’s attorney provided a strong argument that Gamble would have to show a lot more than he has to overcome the Court’s 170-year-old precedent on the doctrine.

Posted in Habeas Corpus
← Aiding Illegal Immigrants: Law and Free SpeechFirst Step Act: There Will be a Vote →