On December 6th, the U.S. Supreme Court heard oral argument in the case of Gamble v. United States, which concerns double jeopardy and the separate sovereigns doctrine. Without question, this case will have massive implications for our country.Why? Because, at its core, this case calls into question the ability of both the federal government and states to prosecute citizens for the exact same conduct and impose separate punishments.

The Heart of the Case: Double Jeopardy and the “Separate Sovereigns” Doctrine

The essence of Gamble v. United States revolves around the meaning of the double-jeopardy clause in the Fifth Amendment to the U.S. Constitution. That part of the Constitution provides that no person shall ““be subject for the same offense to be twice put in jeopardy.” 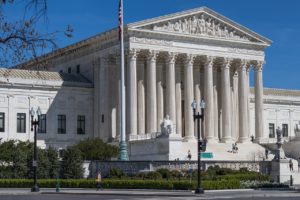 Turns out, things are never so simple when the Supreme Court gets involved. What happens when a person commits a crime, like possessing a gun when they were previously convicted of a felony, that violates both state and federal law? Does the Constitution prohibit a second prosecution for the crime, by say the federal government, after a person has already been convicted in a state court for the same acts?

Under current law, the answer to this question is “yes.” The federal government can prosecute you for a crime that is virtually identical to the crime you were already convicted of in a state court.

In fact, for many years now, the U.S. Supreme Court precedent has been that a person can be tried in both federal and state court for offenses arising from the same incident. The Court’s reasoning has been that the federal government and a state government are different sovereigns with a different set of criminal offenses. This rule was also created by the courts at a time before the Supreme Court held that the double-jeopardy protections in the Constitution applied directly to the states.

These principles are what is called the “separate sovereigns” doctrine or the “dual sovereignty” doctrine.

Terance Gamble was pulled over in Alabama. The police, smelling marijuana, searched Gamble’s car and discovered marijuana, a scale, and a handgun. Gamble was convicted under the Georgia state law which prohibited felons from possessing a firearm.

After Gamble’s Georgia conviction for the firearm possession was final, the federal government then brought new a new federal case against Gamble. The charge? Being a convicted felon in possession of a firearm. The only difference was that the federal case claimed Gamble violated the federal law which made Gamble’s conduct illegal.

Gamble tried to challenge the federal prosecution by saying it violated the Constitution’s Double-Jeopardy clause. Gamble argued that he was twice being put in jeopardy of facing criminal punishment for the same facts. Unfortunately for Gamble, he was facing decades of U.S. Supreme Court precedent approving of these types of cases under the “separate sovereigns” doctrine.

Gamble lost his challenge in every lower court because of existing precedent which those courts had to follow. Gamble eventually wound up challenging the “dual sovereignty” doctrine in the U.S. Supreme Court and asking the court to throw out these archaic rules.

Gamble put out a number of arguments during oral argument before the Court on December 5th. Those arguments included:

The Government’s Case to Keep the Doctrine Alive

At oral argument, the Government countered Gamble’s position by arguing the following:

The government’s claim that these types of dual prosecutions are not common is pretty disingenuous. In fact, Gamble was specifically targeted using the “separate sovereign” doctrine as part of an organized effort by the DOJ to punish people with domestic violence prior convictions more severely.

Also, even if a punishment is usually ordered to run concurrently, that is not always the case. Federal courts routinely impose a punishment that runs consecutively, at least in part, to a state conviction. An additional prosecution and conviction may have future collateral consequences for a person too in the form of enhancement sentencing ranges.

Of course, none of the government’s offered rationales account for the financial and emotional toll a person faces each time they are dragged in to court by a “separate sovereign” for the same facts.

What is most interesting about this case, making it the case of the week, is that the legal fate of Mr. Gamble is really not the biggest takeaway from this case. What happens once the Court hears and decides this case has implications for our entire system of government and the rule of law.

We will keep everyone posted about Gamble. Hopefully the Court hands down a favorable decision.